In 1168, the first discovery of silver ore in Freiberg had a profound and lasting effect on the development of the region. Located in a Central European mountain range southeast of the Federal Republic of Germany and the northwest of the Czech Republic, the region has played a major role at certain times in the output of tin (15th century), silver (16th century), cobalt (17th and 18th centuries), caolin (18th and 19th centuries) and uranium (20th century) in a global context. The rich ore deposits gave the region its name Erzgebirge (Ore Mountains). Mining was for centuries the key industry forming an exceptional transboundary mining cultural landscape with all its typical surface and underground installations, mining towns and natural features as well as the associated intangible values. The mining history and its impact on the landscape, the people and the culture is documented by several mining landscapes creating altogether the Erzgebirge/Krušnohoří region that has been nominated as transboundary World Heritage site.

Located in the Freiberg mining district, the Reiche Zeche (Rich Mine) mine is one of the oldest silver mines in this area. Its name is first documented for two shafts in 1384. In the following centuries, several other shafts such as the Alte Elisabeth (Old Elisabeth, 1511) and the Himmelfahrt (Ascension, 1716) developed in the neighbourhood. At the end of the 18th century, all shafts were combined under the name Himmelfahrt Fundgrube (Ascension Mine) which developed in the 19th century into the biggest European silver mine with over 2,800 miners and an output of 448 tons of silver between 1840 and 1896. With the decline of the silver price since 1873 the number of miners was step by step reduced and in 1913 the mine was closed. In 1905 it was decided to use the two shafts Reiche Zeche and Alte Elisabeth as research and teaching mine for the Bergakademie (mining academy) Freiberg. Today, the Himmelfahrt Fundgrube is a modern research and teaching place for the Technical University Bergakademie Freiberg and also a visitors’ mine where tourists can visit underground structures of the 14th to the 19th centuries.

The Rothschönberger Stolln (Rothschönberg drainage gallery) is regarded worldwide as the final point of the technological development of trans-regional water-adits. Constructed from 1844, it is the most important and deepest lying adit system of the Freiberg mining district still in operation today. The construction of the gallery is the result of numerous technical and technological innovations. Eleven Lichtlöcher (shafts) were deepened to advance the gallery. Located on a large heap, the Lichtloch VII is a well-preserved example of these shafts including the hoisting house with adjacent wheelhouse, the mine forge and the powder house. Today, a local mining club carefully maintains the site and presents it to the public.

The participants of the European Heritage Volunteers Project worked as well at Reiche Zeche as at Lichtloch VII.

Furthermore, some of the participants worked in another part of Reiche Zeche in order to prepare the construction of an access to the neighbouring former mine Geharnischt Männer. The mine workings were not accessible for a long time – the ladders are in bad condition. Last visits in 1998 showed that the place will provide a lot of archaeological findings from historic mining periods, at least from the 16th century onwards. Aim of the works was to open up the mine again as an archaeological training field for students. Therefore it was necessary to transport material to enable the re-opening to this area, in particular to transport ladders through the narrow adits below the surface to the shaft and to transport waste material stored in the adits on the way back.

At Lichtloch VII the participants supported the roofing of the hoisting house by using wooden shingles, a traditional way of roofing that came out of use during the last decades. The works had been led by several master craftsmen specialised on traditional carpentry and roofing techniques that provided in the afternoon additional presentations and courses in these techniques.

In addition, the volunteers covered under the guidance of a bricklayer specialised in traditional masonry techniques the floor of the hoisting house with historic flagstones that had been rescued from another historic building which had been unfortunately taken away.

In the frame of the educational part various guided tours, excursions and lectures had been organised so that the volunteers could gain a comprehensive and detailed inside view into the Historic Mining Region Ore Mountains, its potentials and the challenges to rescue, conserve and revitalise it.

The project has been organised by European Heritage Volunteers, in collaboration with Technische Universität Bergakademie Freiberg, Institute for Industrial Archaeology and History of Science and Technology, and the Saxon World Heritage Coordination and supported by the Förderverein Montanregion Erzgebirge (Association for the Mining Region Erzgebirge / Ore Mountains). 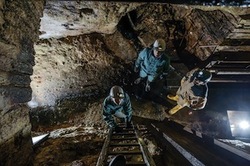 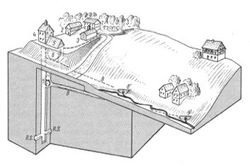 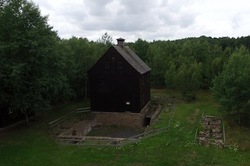 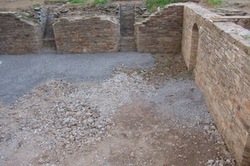