The Annaberg-Frohnau Mining Landscapes developed during the second phase of the silver mining activities in the Ore Mountains when the activities were reaching the upper parts of the Ore Mountains at the end of the 15th century. Annaberg is the first planned mining town in the region and is characterised by an exceptional town layout and architecture, with mine workings located directly beneath the town.

The Frohnau silver mining landscape, immediately associated with the town, has been shaped by a large number of historic mines from the late 15th to the 20th centuries. The landscape is an extensive mining area characterised by countless historic open cast and underground mining sites. These include the large waste heap landscape with small heaps from the 15th to 17th centuries following the ore lodes, the larger waste heaps of the main shafts from the 18th century as well as the major waste heaps attributed to uranium ore mining in the middle of the 20th century. The heaps differ both in their appearance and nature of the deposited material and vegetation growth. Mining ceased at the end of the 19th century, but resumed in 1946 in connection with uranium ore mining in the Markus Röhling mining concession. These efforts, however, did not result in the extraction of any significant amounts of uranium ore.

The Markus Röhling mine with its adit and silver and cobalt mining underground galleries from the 18th and the 19th centuries, wheel chambers from the 18th century as well as the uranium mining galleries of the 20th century became the most important mine in the Annaberg-Frohnau Mining Landscape in particular due to the opening up of high-grade ore zones.

The historical mining site “Markus-Röhling-Stolln” is as visitors mine open for the public.

The project includes various works focussing on the maintenance of the site, its over- and underground objects and machines, and the improvement of its presentation to the public.

The main focus of the project will lay on the reconstruction of historic waterworks in accordance to historic drawings. Under the guidance of a carpenter specialised in historic mining techniques the volunteers will reconstruct wooden waterworks in the mine that were used for water management. The works will include the reconstruction of a pumping system, both over- and underground, for driving the water wheel and a replica of a four-man winch according to the hoisting shaft – both over- and underground. Both reconstructions will improve the presentation of the site to visitors.

In addition, the volunteers will support to maintain the collection of historic mining machines that are partly still functioning and are used for demonstration purposes. The work includes the installation and reparation of a historic loader in the outdoor area, protecting machines from corrosion, and the erection of a roof to protect the outside equipment.

Finally, the volunteers will improve the accessibility and visibility of the area of the Markus Röhling Mine. The mine covers over ground a larger area that is accessible by an educational path. The intervention shall improve the condition of the path and related structures by removing the vegetation of the 1st Lichtloch (shaft) and renewing the barrier.

The project will take place from August, 17th, to August, 31st, 2019 and is organized by European Heritage Volunteers and the Institute for Industrial Archaeology and History of Science and Technology at Technische Universität Bergakademie Freiberg, in collaboration with the mining association “Markus-Röhling-Stolln Frohnau”. 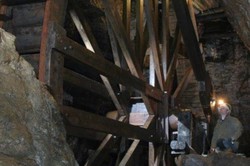 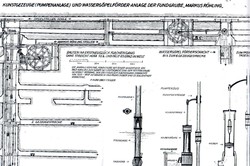