Schlierbach Monastery is situated in rural Upper Austria, where rolling hills give way to green pastures, and beautiful forests run along the path of the enchanted Danube River. However it is what is found within the monastery which attracts visitors and history enthusiasts alike: gorgeous halls of breathtaking Baroque splendor and a place that exhales the history of centuries.

The story of the monastery began in 1355, when a group of Cistercian nuns moved into Schlierbach Castle. Over the course of the next decades, they transformed the castle into a convent. The turmoil of the Reformation period brought monastic life in Schlierbach, as in other places, to an end. For sixty-four years the building fell into disrepair until Cistercian monks from Rein monastery settled there in 1620. They then assumed the mission to care for the spiritual welfare of the people in the surrounding area and to let monastic life flourish again.

After the Cistercian monks settled in, the place developed into a centre of learning and monastic culture, modelling the surrounding landscape around this place. Schlierbach Monastery has constantly been in existence ever since. It was during this period that the monastery was transformed into an architectonical jewel with beautiful interiors and art. In a joint effort, abbots who enjoyed building and members of the Northern Italian artist family Carlone refurbished the monastery completely, starting in the last quarter of the 17th century. What they planned and erected can still be admired in Schlierbach today.

One of the artistic masterpieces found in the Baroque cloister is the Schlierbach Madonna, a wooden Gothic madonna from around 1320. It is one of the most beautiful madonna statues in all of Austria.

Another sight which is part of the ensemble is the collegiate church, built between 1680 and 1682. This church is adorned with splendid frescoes and stucco works. The church is a work of genius by the Italian artist family Carlone and other local artists, who created within the edifice a Baroque amalgamation of the arts in the 17th  century.

The library is another centerpiece in the monastery complex. It was built in Baroque style in 1712 by Carlo Antonio Carlone. It is a cross-shaped ceremonial room with sail-vaults. There are a total of about 45,000 volumes, incunables and manuscripts.

The Bernardisaal is a state room with a lot of stucco work on the ceiling and walls as well as frescoes and paintings. Here the mundane component of the baroque age is reflected – the typical Baroque imperial hall was meant to glorify the sovereign.

All these elements together constitute an exceptional setting for the European Heritage Training Course, where the participants will be able to learn and inspire themselves in the beautiful examples of artistic expression from the centuries of religious splendor in Austria.

During the European Heritage Training Course the participants familiarised with all steps of the restoration process of historic windows – from the documentation over wood works, glass works and coating.

The total inventory of windows of Schlierbach Monastery amounts to about 260 wooden windows which can basically be grouped into three categories:

The oldest windows can be found along the corridor facing the inner courtyard. These windows are single-shell windows with two casements – which can be opened – each and a fanlight above. Their formats are 115 x 160 cm and 130 x 190 cm respectively. Mostly these wooden windows still contain mouth-blown, colourless sheet glass, which was inserted into the outer fold and fixed all around. In some of the fanlights there is still high-quality hexagonal lead glazing made from cut colourless bullion point sheet.

To a second category belong wooden windows which were glazed with insulating glass. These windows including the glazing were renovated between 1970 and 1980. The formats are also between 115 x 160 cm and 130 x 190 cm. The insulating glass was secured with glazing beads and sealed with silicone.

The third category is represented by composite windows with wooden frames of similar dimensions which were produced between 1970 and 1980. Their glazing consists of colourless drawn sheet glass or rather float glass.

The undertaken measures basically aimed to preserve and conserve ten of those windows. The first task to be done on the windows was to remove the industrial glass wherever it had been inserted in previous restorations and replace it with handmade glass more accurate for preserving the historicity of the windows. The participants learned how to differentiate the two types of glasses, and after all the glasses that needed to be changed were removed, the participants were then guided to work on the frames.

Once the frame work was done the participants began installing the new glasses. The participants learned how to cut them and make them fit into the frame, to fixate them and finally to seal them with new linseed oil putty, taking care that everything looked like the way it was before.

The training course allowed the participants to obtain a lot of knowledge in the use of materials and tools related to this work. The delicate work required for handling the historic wooden frames of the windows, guided by a by a master of joinery with an additional education as “Restorer in Handicraft” and several decades of experience in this field, provided a high-quality overview into the craftsmanship involved in restoration of wooden elements. Additionally, the works related to glass were guided by the Schlierbach Glass Manufactory – one of the rare still existing firms experienced to apply traditional kinds of glass as mouth-blown glass, lead glass and others, which is working in the field of heritage conservation not only in Austria, but in many other European countries. 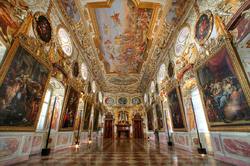 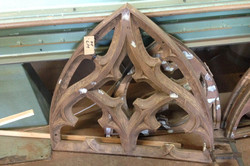 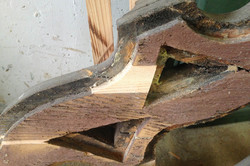 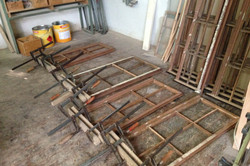