Poador del Pontet is a monumental fountain complex dating back to the 18th century which was serving as a water supply for the inhabitants of the town. It has a semicircular shape where twelve jets of water sprang up on a nine meters long rectangular raft.

In 1782, Poador del Pontet was mentioned for the first time in a document. After more than hundred years, in the middle of the 19th century, it fell into disuse and its existence was forgotten little by little. In 1963, the ditch was coated. When Poador del Pontet was re-discovered in 2014 it was covered by one meter thick layer of soil.

Since 2015 several archaeological excavation campaigns have been carried out that have allowed to recover the main structure of this water complex. The excavations have been undertaken by archaeologists of Altea municipality, with the support of volunteers from different countries.

The excavations showed that the circular structure of the fountain had been gradually filled due to the contribution of mud from Barranquet cavine which runs through the Western part of Poador del Pontet. Taking into account the materials found during the excavations, the process started in the middle of the 19th century.  Among the elderly people in the neighbourhood, as historians pointed out, no one remembers seeing or hearing their parents or grandparents talking about this structure, but they did use the same section of the ditch as a scrubber until the 50ies of the 20th century.

Within the framework of the project the excavations will be continued. The volunteers will work together with local archaeologists who will explain them the work and the background of the site.

The tasks will content physically demanding works as digging and transporting soil as well as the documentation of the excavations, the cleaning and the catalogisation of the findings.

As a part of the educational programme information about other archaeological areas nearby will be provided and visits to those areas as well to archaeological museums will be organised.

The project will take place from September, 1st, to September, 13th, 2019 and is organized by the Association De Amicitia, in partnerhsip with European Heritage Volunteers. 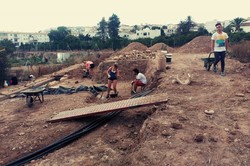