From April 2019 on, the German version will be presented as a permanent exhibition in Weimar / Germany, at the former Garden Inspector’s House of Belvedere Castle Complex, but that will be available for shorter periods to be presented at other exhibition places in Germany, too.

The English version is available on request to be presented all over Europe.

A reduced currently version of the exhibition is presented at the fromer Grand Hotel "Waldlust" in Freudenstadt / Germany, at the Moses Mendelssohn Academy in Halberstadt / Germany and at the Benedctiine Abbey in Tyniec / Poland.

The exhibition shows projects at cultural and natural World Heritage sites as well as projects at sites inscribed on the World Heritage List and sites of the particualr national Tentative Lists. The projects in Europe had been selected while also taking in account the aim to illustrate the diversity of cultural heritage – showing a historical town, a complex of castles and the surrounding parks, an industrial heritage site from the 19th century and a former military site.

In the meantime the exhibitiond been attended by more than 19,000 visitors.

Furthermore, the exhibition had been presented during some of the UNESCO World Heritage Volunteers projects having taken place between 2015 and 2018 in Europe in order to strengthen the network of the participating organisations and institutions.

Both exhibitions are produced in the same design so that they can be presented either separately either in combination.

In case you would be interested to present one or the other of the mentioned exhibitions in the framework of an activity linked to heritage, to volunteering or to both topics, do not hesitate to contact us. Depending on the time and the place you plan to present the exhibition, the duration, the kind of transport and other parameters we would be able or to send either the whole exhibition inclusive the presentation system, the panels without the presentation system or only the files to print the panels at your place yourself. 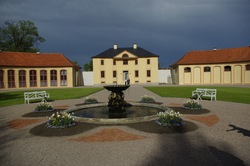 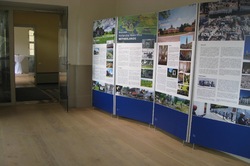