Himarë is located in the Southern Costal region of Albania. It is stretched long and low across a rock outcropping, which has a kind of pride in its posture as it looms over the sea. From afar, it can be difficult to distinguish castle from town. Of all the settlements of the region whose forms have been preserved since antiquity, Himarë is the largest in terms of area. To walk through the village is to be transported to a place that was a significant military outpost in addition to being an important point in regional commerce – and a home to many.

In antiquity, Himarë was called Kimera or Himera and was the capital of the region and of a population known as the Chaonians. This tribe has been mentioned in documents dating to as early as the fifth century B.C., later by a series of ancient Greek and Roman authors.

Available documents indicate that Himarë has been inhabited by a native Albanian population continuously since the early Middle Ages. The population of this area has been called Allvani, Albanezi or Arnaut, by successive Byzantine, Venetian and Ottoman rulers. In the medieval period, men from the Himarë province migrated westward offering their services in both manual labor and their combat skills at the service of European kingdoms. Albanian migrants fought as hired mercenaries for the Kingdom of Naples and in the French armies of Napoleon.

In the fifteenth century, as Balkan territories fell one after another under Ottoman conquest, Himarë and the surrounding province resisted fiercely, though eventually it too fell. Even after the Ottoman conquest in 1417, the population of the province appears in the chronicles in a state of constant rebellion. In 1473 and into the beginning of the 16th century, Gjon Vlash led the Himariots to an unexpected victory, which remains a milestone in the annals of the history of this area.

The population of Himarë has historically been farmers, with olive cultivation and olive oil processing being the most common agricultural activities. Apart from olives, Himara also produced a great deal of citrus. Today, Himarë livelihoods have shifted toward tourism.

Of the ancient buildings that exist in the entire Southern region, the Himarë Castle is the most grand. The fortification is perched atop a 140-meter-high hill, and afforded natural protection from the northeast and southeast precipice. Ancient traces of an eighth century B.C. wall is what has defines the line of the current form. These ancient walls are combined with trapezoidal outcroppings, which surround the hill from the northeast to the northwest, leaving the precipice that rises above the Visha River unfortified.

There are a great number of preserved medieval buildings in Himarë, but the fabric is mainly composed of dwellings built at the end of the eighteenth and nineteenth centuries. This generation of buildings used stone and mortar as raw materials, with wooden floors and ceilings. The majority of houses take advantage of the hilly terrain by creating by small gardens walled in by dry-stack stone. In the old city center, houses located within the surrounding walls of the castle are very densely packed, and the streets are narrow and generally paved with cobblestone.

The most notable architectural monuments of Himarë are churches, which appear inside the castle walls as well as in outside quarters and carry architectural and historical values; some of them date back to the fourteenth and fifteenth centuries.

The Church of St. Sergius and St. Bacchu is built in the highest point of the village, in the northwest and near the walls of the castle. The church consists of a narthex, naos and altar. The church walls retain traces of numerous reconstructions. A document of the year 1577 indicates that the church was burned and rebuilt. It served for a long time as the seat of the bishopric of Himarë. The church had two main construction phases: the initial construction belongs to naos with the lower parts of the walls, because the upper parts were built several times. The narthex constitutes a later construction proved by technological advances in construction techniques. The naos is separated from that of the altar by a wall in iconostasis, with decorated frames with floral motifs. The naos is accessed through an entrance on the west side connected with narthex, and one from the south that leads to the courtyard of the church. The fresco of the church is preserved in the large semicircular apse. The bell tower, which stands six-meters high, sits in the corner, and at the northern entrance to the narthex a vault is immured with four carved eagles.

Before the project started the church was highly endangered: The roof construction and the roofing of the naos were partly damaged so that rain could ingress into the building and injure the walls, the iconostasis and the frescos.

The European Heritage Volunteers Partner Project concentrated on the naos: The roof construction had been dismounted and – while reusing parts of the current construction – the very damaged timber elements have been replaced by new elements. The restored roof construction have been recovered by historic tiles partly reusing the original tiles and partly using tiles that had been collected from ruins in the surroundings. In addition, conservation works in the damaged parts of the walls have been carried out.

The works have been basing on a restoration project designed by the National Institute of Cultural Monuments and the Regional Directorate of National Culture Vlora. 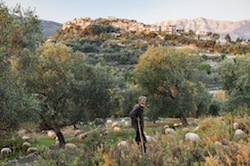 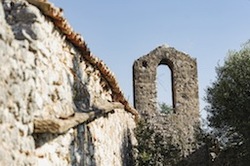 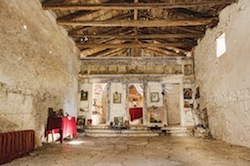 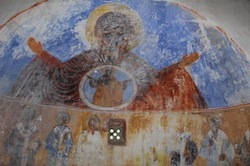 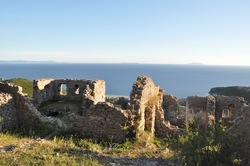