The ancient city of Amantia has been one of the most important cities of South Illyria; in architectural terms it is one of the most monumental cities. Because of the special historical, archaeological, architectural and environmental values it has been declared in accordance with the Law on Cultural Heritage of Albania as a First Category Culture Monument and it is one of the National Archaeological Parks of Albania.

From the ancient city ruins of the fortification of the Acropolis, the Ancient Stadium, the Early Christian Basilica and the Temple of Aphrodite as well as remains of other buildings have been preserved.

The trait of Amantia and one of its most attractive elements is the necropolis, rich in monumental tombs, dating back to the late 4th century BC. The ancient tombs of the necropolis have a wide stretch and are scattered across many hills which are surrounding the ruins of the ancient city. Archaeological studies and excavations in some of the tombs have shown that many of them have monumental architecture. Most of them are tombs of “archway type” or of the ''Macedonian type”. A special grave type is the circular tomb called "Tomb 107". Another special type is the one in the form Π, which has been identified solely in the necropolises of Amantia and Bylis. This type of monumental tombs is characterized by burial on a rectangular or quadratic platform on which a Π-shaped superstructure is raised. Three specimens of this type of tombs can be found in the necropolis of Amantia, among which the most representative is the so called "The Jew's Tomb".

One of the most sensational cases that attracted even the media's focus in Albania was the violation of the monumental tomb called "The Tomb of the Jew" by unidentified persons while archaeologists of the Tirana Institute of Archaeology were excavating the tomb to document it. This episode caused the termination of the archaeological excavation project of this monument, leaving it in a damaged condition.

The monumental tomb called "Tomb 107" which has been excavated and documented by the Tirana Institute of Archeology from 2014 to 2016 contains structures of several tombs, which are being damaged due to their exposure to atmospheric elements and have a risk of being broken down eventually. Interventions for their conservation are indispensable.

In addition to the monumental tombs, in the North-Eastern part of the Necropolis there are a considerable number of comparable simple cist tombs excavated many years ago by clandestine excavators, whose structures risk being damaged.

The project aimed to rehabilitation, archaeological rescue excavation and documentation of damaged funerary structures in the North-Eastern area of the necropolis.

The intervention consisted of the removal of soil caused by the clandestine digging activities, the opening of a survey of the archaeological structures and their documentation.

Due to the violation of the “Tomb of the Jew”, some of its blocks had been collapsed. During the project the vegetation has been removed, the harm cleaned up and the architectural elements returned by anastylosis to their original places.

The stone cist graves have been cleaned of soils and documented in order to enable their later conservation. Brick-structure tombs located within the “Tomb 107” have been conserved.

The final objective of the project was not simply the rehabilitation of the necropolis and interventions for the conservation and the protection of monumental graves. The entire process of interventions has been carried out in accordance to the ongoing musealisation of the necropolis. The monumental tombs shall be better accessible thus to became an attraction for the visitors of the Archaeological Park of Amantia.

The project has been organised by the Directorate of Cultural Monuments Vlore, in partnership with European Heritage Volunteers. 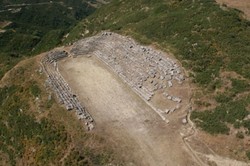 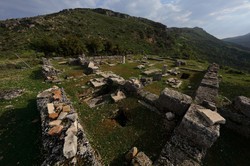 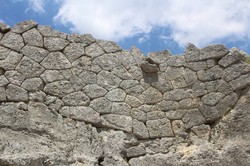 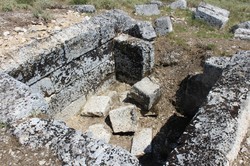