The complex of Belvedere Orangery and the associated buildings had been restored by Klassik Stiftung Weimar (Weimar Classics Foundation) during six years and had been festive inaugurated in summer 2015.

During the winter season the Orangery fills the function it had been constructed for – to storage the plants of the gardens and parks of the World Heritage site “Classical Weimar”, some of them more than 250 years old –, but from June to September the building is free of function. So European Heritage Volunteers saw the possibility to use the Orangery as a place for a temporary exhibition promoting World Heritage sites.

From July to September 2015 an exhibition presenting all World Heritage sites in Germany on panorama photos prepared by the German National Commission for UNESCO and the German Federal Foreign Office had been presented in a cooperation of European Heritage Volunteers and Klassik Stiftung Weimar at Belvedere Orangery.

The exhibition had been festive opened by a speech of Verena Metze-Mangold, president of the German Commission for UNESCO, in which she underlined both the necessity of international cooperation for the protection of World Heritage as the importance of volunteering as a way to create understanding and to raise awareness for the World Heritage and to support its protection, restoration and maintenance. The complete speech which had been held in German language you can find here.

In conjunction with the opening of the exhibition participants of the World Heritage Volunteers project “Parks and Gardens of Classical Weimar” presented World Heritage sites of their countries of origin, so from the Czech Republic, from Egypt, Mexico and Morocco.

During its nine weeks duration the exhibition had been attended by more than 4,700 visitors.

For one the next summer seasons, European Heritage Volunteers plans in Belvedere Orangery in cooperation with Klassik Stiftung Weimar and international partners an exhibition about World Heritage Sites outside Germany. 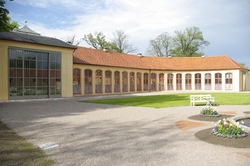 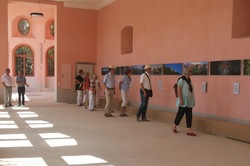